END_OF_DOCUMENT_TOKEN_TO_BE_REPLACED

[PR] Surrogacy: Draft recommendation rejected by the Council of Europe.

No Maternity traffic welcomes the rejection of the recommendation on surrogacy by the Parliamentary Assembly of the Council of Europe (PACE). This text pretended to protect the children from the consequences of surrogacy but did not condemn this practise.

END_OF_DOCUMENT_TOKEN_TO_BE_REPLACED

[PR]-No Maternity Traffic calls to prohibit surrogacy in all its forms.

On Tuesday 11th October, from 5.00 p.m. in the Assembly of the Council of Europe, the draft recommendation entitled “Children’s rights related to surrogacy” will be examined. The Collective No Maternity Traffic calls for a dismissal of the text, or for amendments to prohibit surrogacy in all its forms.

The report, which was supposed to address the crucial question of human rights and ethics of surrogacy had a chaotic path (the Rapporteur was suspected of conflict of interest, the procedure was in camera, the draft resolution was rejected but the recommendation was discussed and voted…). The Rapporteur, the Belgian Senator Petra de Sutter, whose first report had been dismissed last spring, re-entered the fray with a new and modified report, limiting itself to “Children’s rights related to surrogacy”, completely obliterating the evaluation of the practice of surrogacy itself.

The Committee of Social Affairs dismissed once again the draft resolution of the Rapporteur during an in camera meeting in Paris on 21 September, while adopting a draft recommendation which actually is very dangerous and opposed to the interest of children who were born through surrogacy. This text which is only two paragraphs long pretends to protect the children from the consequences of surrogacy but does not condemn this practise.

For No Maternity Traffic, “Pretending to deal with the consequences of an injustice without condemning its practice equals to justifying it.”

Surrogacy, whether it be called “altruistic” or “commercial”, whether it is legal or not, is in all cases a violation of the rights of children, who thus become the object of a contract of sale or transfer. Moreover it is intolerable that for a question of such importance, no one mentions the use that is made of women, who are considered as surrogates or gestational carriers. The reification of the human being is absolutely opposed to the human rights and that is the reason why the Parliament of the European Union clearly condemned surrogacy in 2015 (§114).

A petition, of more than 100,000 signatures lead by our collective was declared admissible by the Bureau of the Parliamentary Assembly of the Council of Europe to be taken into account in the debates concerning this report. These European citizens demand the prohibition of surrogacy in all its forms.

[PR] Surrogacy: debate is still on in the Council of Europe. 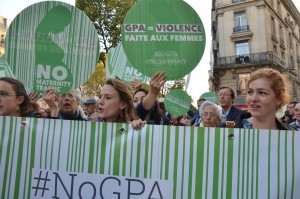 No Maternity Traffic acknowledges the dismissal, by the Committee on Social Affairs of the Parliamentary Assembly of the Council of Europe, of the draft resolution on surrogacy. This project was dangerous for it implicitly accepted the very principle of surrogacy.

END_OF_DOCUMENT_TOKEN_TO_BE_REPLACED

FIGAROVOX/TRIBUNE – Council of Europe: the trap of the “altruistic” surrogacy

“A report condemning “commercial” surrogacy and praising « altruistic » surrogacy is being presented to the Council of Europe. For « No Maternity Traffic”, this distinction is used to endorse the very principle of surrogacy.” (…)

“The Belgian MP and gynechologist Petra De Sutter re-enters the fray. After her report was rejected on 15 March 2016, and then postponed in June while she was accused of conflict of interests, she will try again, on 21 September, to get her pro-surrogacy report through to the Committee on Social Affairs of the Parliamentary Assembly of the Council of Europe.

Once again, against any form of parliamentary transparency, the debates will be on camera, and the project is kept a secret. One must remember that the rapporteur is a surrogacy and assisted reproductive technology expert in the Gent Hospital and that she collaborates with a commercial surrogacy firm in India (Seeds of innocence). It is hence in her interest to have Europe accept surrogacy.

The strong opposition to which she is confronted seems to have led her to adopting a withdrawal position: renounce to explicitly demand legalisation of surrogacy, and condemning only commercial surrogacy while invoking “the interest of the child”. This approach, while an apparent consensus, is a trap.

The trap lies on a largely fictitious opposition between altruistic commercial surrogacies: the former would be good and the latter evil. From altruistic, the surrogacy would become commercial should the amount of money given to the surrogate mother be superior to “reasonable fees” caused by the surrogacy. Yet these costs include food, housing, loss of revenue, etc., as well as the compensation for “inconvenience of being pregnant”. No need to say that, in most cases, these reasonable fees are a disguised remuneration.

The dialectics opposing commercial and altruistic surrogacy is a trap that reduces and locks the moral appreciation of surrogacy into one of its secondary aspects: money. Indeed, the problem with surrogacy is not so much the money involved but the situation of the child and the mother who carries him. A cheaper surrogacy would be just as much harmful and reprehensible.

Moreover, the opposition between commercial and altruistic surrogacy is fictitious. The only difference is in the name given to the remuneration of the mother: it is a payment for a commercial surrogacy and a compensation for an altruistic surrogacy. But one must note that the amount of the compensation can be very superior to the amount of the payment! While a surrogate mother receives a “compensation” of about €20,000 in the United Kingdom, the “payment”is not more than €10,000 in Eastern Europe and €2,000 in Asia. To give a “compensation” of €20,000 would be more ethical than a “payment” of €10,000…

In any case, a so-called altruistic surrogacy creates more financial flow than a so-called commercial surrogacy.

When she invites the other MPs to condemn with her, vehemently, surrogacy when it is commercial, Mrs de Sutter actually transfers the condemnation to the only commercial character of surrogacy, and hence spares surrogacy in itself. She also sets a trap for the other MPs: the one of ratifying the sole principle of surrogacy, and hence the necessity to supervise it, namely to legalise it. One can only fear that some MPs, too happy to be able to firmly condemn commercial surrogacy may not find out the truth (until it’s too late)

Moreover, the harmful situation in which surrogacy sets the child does not change whether it be called commercial or altruistic surrogacy. In both cases, the child is the object of a contract, given or sold as a good, object of a right to property, which objectively places him in a position of slavery, in the meaning of international law. In both cases, the child is abandoned by his surrogate mother and the risks of reject of the child, for example in case of a divorce of the purchasers or of malformation or anomaly of the child are the same. The consequences on filiation are no less serious, but they are evn worse when the child was carried in the womb of his aunt or grand-mother!

The only realistic way is to commit to fighting this form of human trafficking, or else to resort to consider man as a consumption good for man.

Let’s hope that the Assembly of the Council of Europe will make sure that the values for which the Council was created prevail, to avoid this new form of decay and slavery.”

Translation by No Maternity Traffic